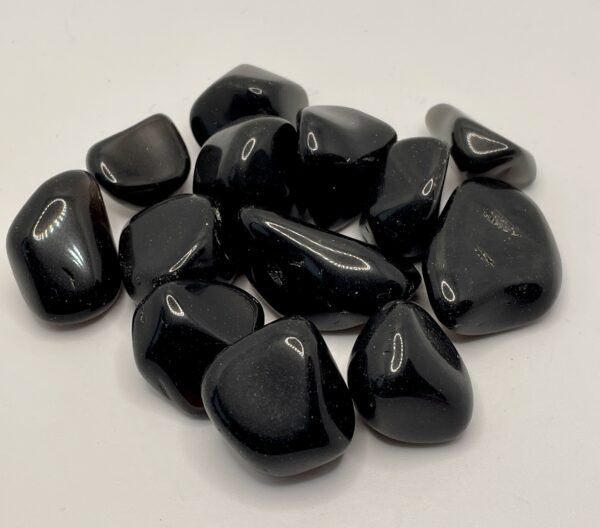 Apache Tears Tumblestones for individual sale, with benefits including

Apache Tears are are form of obsidian they are helpful for healing greif and trauma. they act on both new greif anfd greif that has been “stored away”. They are a gentle stone which makes them perfect for people struggling with processing difficult emotions , they are nourishing and grounding and offer gentle protection to the aura against negativity. Its peaceful and calm energy is good for those suffering from anxiety or fear.

The story behind Apache Tears explains how the stone got its unique name. According to American Indian history, in the 1870s, 75 Apache warriors found themselves outnumbered and trapped by the U.S. Cavalry. Instead of surrendering to their enemy, these courageous men leaped from a cliff to meet their death.

Legend says that when the Apache tribe women found out they had lost their fathers, husbands, and sons in such a tragic way, they cried day and night for over a month. Upon falling to the ground, their tears formed the oval-shaped stones now known as Apache Tears.

For that reason, ancient lore claims that those who own or carry a piece of this stone should never need to cry again, because the Apache women cried enough tears for all those who mourn.

There are no reviews yet.

Be the first to review “Apache Tears Tumblestones” Cancel reply

This website may use cookies. For more information on how they are used and how to disable them see our <a href="/privacy-policy" target="_blank">Privacy Policy</a>. Not accepting cookies may affect your experience of this site.

Due to Covid, the couriers we use could experience delays and the arrival time of your deliveries may be affected. Dismiss